Up the Rio Negro

The Rio Negro was my second project from the Abandoned Roads series and I readily admit that it turned out to be my favourite. If my roots are in Mongolia, then the Amazon gives me my wings. This is the largest untamed territory on our planet, the last natural heaven on Earth. This Nature, which has not lost the will to strike back against the avarice of civilization is the greatest and most exacting of teachers. In the bosom of the Amazon I feel both vulnerable and in love, like a child pressed against the heart of Mother Nature. For me the Amazon is not an exotic adventure or retreat from the world, it is the heart of the Earth and its embrace is strong and eternal.

Driven by the desire to share this amazing world with others, at the end of January I set off for the Amazon with six other adventurers. Over the course of two weeks we paddled up the Rio Negro, visited settlers and Indian communities, bathed in waterfalls tucked away deep in the jungle. None of my companions had ever set foot in a rainforest, but I saw the green fire in their eyes, the fire that infects only those who have come into contact with the Selva. The Amazon captivates the curious and instils fear in all others. This journey allowed me to share my dreams and experiences. I can now rest assured that there are people in Bulgaria who use the words ‘love’ and ‘the Amazon’ in same sentence. It is only through their support that my passion for adventure can reach a wider circle of people.

+5 dishesand many tropical fruits you have never seen before

+ 1 visit to an Indian tribe

+ 1 cave – the Gruta do Refugio do Maruaga

+ 20 waterfalls in the vicinity Presidente Figueiredo, deep in virgin jungle

+ 1 archipelago – paddling in the lower section of the largest blackwater river in the world – the Rio Negro and a close-up of its archipelago, the Anavilhanas

+ Rich fauna most of which free and wild – Close encounters with caimans, anacondas, sloths, piranhas, the pirarucu giant fish, monkeys, parrots, tapirs, turtles and many other

… and a brief encounter with a predator.  The aftermath from our last camp on a river island – two torn hammocks and fresh jaguar tracks. 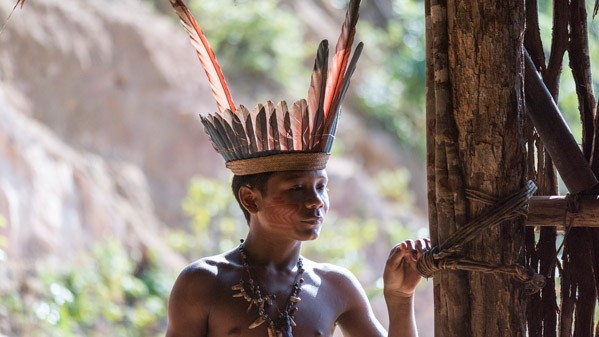